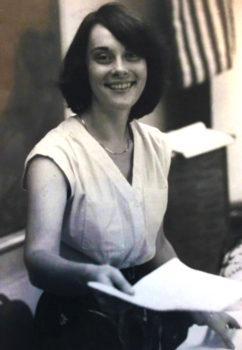 A love for education, a passion for critical thinking, a skepticism for authority, and a compassion for the underdog. She was Sharko.

Sharon L. Sharko was born July 8, 1951 at St. Mary’s Hospital in Milwaukee Wisconsin, the first child of Leo and Cecelia Sharko. Her father Leo Sharko was a second generation Croatian-Slovenian, his parents Andrew and Anna Sharko emigrated to the United States after the First World War. Leo graduated from West Division High School in 1941, served in the United States Army during the Second World War, and worked at Miller Brewing Company after the war. Cecelia Sharko, the daughter of George and Margaret Keating, graduated from Milwaukee Juneau High School in 1945 and worked in accounting at Allis Chalmers.

Our mission is to provide supplemental funding to public high school debate and speech organizations that have experienced significant cuts in their budgets or receive no public school funds for their programs.

" I learned how to think critically, how to develop arguments, how to speak clearly, and how to research. Everything I... "